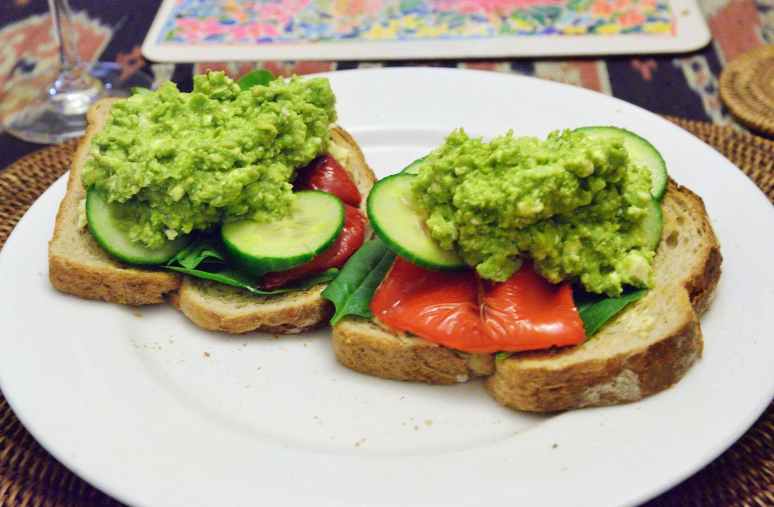 Smashed avocado and feta on a bed of spinach, roast capsicum and cucumber

smashed avocado. That’s what the recipe called for, not the somewhat gentler term mashed. By adding an ‘s,’ it required the vegetable to be pulverised to bits forcefully or as a dictionary definition of the word puts it; ”to break into pieces with violence and often a crashing sound.”

It is not surprising in an era where preparing digestable nutrition has been reduced from the simple pleasure of offering tastebud satisfaction, into a gladiatorial televised spectator sport.

Therefore it is also not surprising something as basic as cooking is being infiltrated by the language of combat. In this spirit and to ramp things up I suggest we upgrade the titles of some such TV programs from ‘Master Chef’ to ‘Totalitarian Dictator Chef’ and ‘My Kitchen Rules’ to ‘My Kitchen Beats the Living Shit Out of Yours.’

Melbourne is now in the grip of its Food and Wine Festival, while Australia is in the grip of possibly the most mutually destructive era in its political history, led by a prime minister who self describes as a “fighter.” Tony Abbott is a one-time boxer known to his enemies as Captain Combat. Falling into line with his boss, Treasurer Joe Hockey has called for a ”Grey Army” of older workers to wage war on the spectre of an ageing population. So if this government can place the nation’s political soul on a perpetual war footing, why not its cooking? A jihad aimed at the digestive juices.

Around longer than Abbott has been a US rock band The Smashing Pumpkins, but they began in the late ’80s and cannot be blamed for the current trend. An Australian food website called ‘Smash’ exists, but is devoted to promoting sausages as comfort food.

A clue to the smash vs mash conundrum does exist on the BBC television network’s food section for a recipe called, ‘Smashed sprouts mash with chestnuts.’ It instructs to mash the sprouts into a chunky texture with a potato masher. So that’s the difference, smashed means not quite mashed, but would seem a bit of a squib to say that in this pugilistic age where it is more in keeping with current absolutist values to choose an aggressive term over one that is merely descriptive.

Following this bellicose logic, perhaps in the current climate and seeking the truly exotic, there is a great publishing opportunity for a truly intriguing cookbook. How about ‘Secret Delights from the Kitchens of Islamic State?’ Food fit, if not for a king, at least for a Caliph.

3 thoughts on “VIOLENCE TOWARDS VEGETABLES”