CONSIDERING THE ALIMENTARY IS SO ELEMENTARY.

A Game of different Thrones.

Is it a tank or a space capsule? Sorry it’s a toilet, in the middle of nowhere.

Just imagine if Dr Who had been an Australian. The Tardis would not have been a police box, it would have been a public toilet. Now, that would have given the Daleks something to exterminate or at least disinfect. Imagine the confusion caused by a brick and concrete dunny plonking itself in the middle of some alien civilisation. What would be the effect on our eternal time lord of appearing in a thunder box instead of a police box?

For decades Australia’s civic engineers have rejoiced in plopping these structures in conspicuous places all over our landscape, a triumph of bodily function over form. Sometimes you look at the kind of beauty spot, where a more aesthetically sensitive culture, like the ancient Greeks or Romans, might have placed a temple. In Australia it is likely to be occupied by a shithouse: a pean to poop.

A vision of paradise decorates a building with a much less salubrious purpose.

I consider this because last year, we came across a public convenience of a shape that was out of this world. (See photo above.) If it wasn’t cement, it could have doubled as a space capsule. It was possibly built as a side product by a company that makes concrete water tanks to catch rainwater for country houses and farms. From water supply they branched out into water closets. It was an utterly functional concrete cylinder with a long drop bog inside and was on a road with the flashy name Silver City Highway where no matter how long you drove, nor how fancy the road’s name, you still seemed to end up in the middle of nowhere. 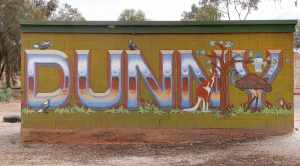 Just so you don’t think it is a church.

And that seems to be the problem with Australian toilets. There are enough of them in the middle of nowhere, but increasingly few in the middle of somewhere. A few years ago I had a loud dispute with a service station operator, who I discovered had closed their toilet just after I had filled my car and wanted to empty my bladder when I paid for the fuel. They sold drinks but did not seem to comprehend the inconsistency in closing off the place where one could relieve oneself of the by-product. I threatened to piss on his petrol pumps.

An Australian dedication to a beauty spot.

In the suburbs, the convenient old fashioned pee and plop facilities are being replaced by those painful automated Exeloo things, that cater for one occupant per cubicle and as soon as the door is shut burst forth with an orchestral version of Bert Bacharach’s “What the world needs now is love sweet love.” Rubbish! What the world needs now is more toilets, useful ones in better places.

Recently on a holiday to the far north, we stopped at the town of Port Douglas, I was caught short and headed for the one Exeloo in a nearby park. I missed being the first there by a couple of seconds. While the automated voiceover tells you in an American accent, as the door slides shut that your maximum use time is 10 minutes, this guy seemed determined to use every one of them. Another would be patron came along and pissed in the nearby bushes. I gave up and found an obliging bar that let me use their toilet.

The one Port Douglas Exeloo cubicle had been occupied for some time, so this frustrated patron is about to piss on a palm tree.

This trend seems to ignore a compelling demographic reality. Fairly soon, with our ageing population half the continent could be incontinent. So let’s deal with the problem now. We seem to be opening more eating and drinking places than ever, so we need to be more realistic about what happens to these substances once they pass through our alimentary canals. Public toilets were the product of a more socially conscious time to discourage people caught short with the urge, from pissing and pooping in public places.

Now in the age of making things public private again, these public facilities are either being removed entirely or minimised with those inadequate Exeloos or “Boxes of bog and Bacharach” as I like to call them.

No Bacharach tunes here. A classic council built public dunny, that could be in the city or country. It should be a heritage listed building. This one thoughtfully features a shady place to sit after any alimentary exertions.

Years ago on a trip to Nepal we could see the result of public authorities’ absence from responsibility for dealing with these calls of nature. The Kathmandu bus terminal would have been better named Kathmanpoo with nearly every bit of its concrete paving taken up with piles of human excrement. Descartes’ axiom “I think therefore I am.” should be widened, to take into account not just the concerns of our thinkers, but the needs of our sphincters. A couple of recent surgical operations left me in hospital with constipational after effects, each time the hospital staff would enquire with considerable concern: ”Have you opened your bowels today,’? If successful I would reply: ”Yes and I closed them too.”

It made me think of Descartes, a product of his 17th century era. Today he could be more prosaic. Perhaps with a line like: ”I crap therefore I live.”

A girl appreciates efforts made to decorate a house of bodily functions.

2 thoughts on “CONSIDERING THE ALIMENTARY IS SO ELEMENTARY.”