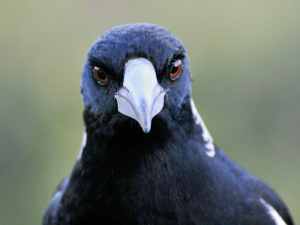 The Australian Magpie, no birdbrain.

“Lorna, Lorna, sitting on the grass, up came a magpie and bit her on the ….” My father, of a more euphemistic generation, politely left blank the space that should have contained the word ”arse,” when he recited his rhyme about a scoundrel bird from my mother’s youth. My mother, one of those people once pecked twice shy, maintained a magpie hatred for the rest of her life.

The attacker on my mother’s tender parts was the pet of two elderly unmarried sisters, my Great Aunts Lil and Pops, who lived in reduced spinsterly splendour in an enormous termite ridden old wide-verandah Queensland house in the once genteel inner Brisbane suburb, Taringa.`

I only saw the house a few years before the aunts died when it was bulldozed into a block of cream brick six pack flats. I was fascinated by its faded grandeur. Two features I particularly remember were a dinner gong and a large dining table with a moth eaten green velvet cover. They cooked in the kitchen on a coal burning stove and in the lounge there was a grand fireplace, a gesture to the land of their British ancestors rather than the reality of sub tropical Brisbane. I think there was even a room for a maid.

I own two relics from that house, given me by the aunts. One is an old ship’s sextant, now displayed in our lounge room and upstairs we have a 19th century turned wood swivel back office chair that I once stripped and oiled. Another gift that did not make it home was a large print depicting the Charge of the Light Brigade in a gold painted wooden frame. That frame was so full of borer, it almost turned to dust before we put it in our car and Dad managed to dispose of it before it could infect our house.

The aunts and their house have nothing to do with this story, except that they kept a magpie as a pet, something once common, but in most states illegal today. The bird was fairly autonomous. It flew around their garden and indeed the suburb during the day, returning to a safe perch in-house for a guaranteed feed during the evening and took a dislike to certain people, in particular my mother.

It seems cruel to confess I have a certain sympathy for the bird. My mother was in my experience, not the most likeable person: jealous, narrow minded and manipulative. She tried to undermine in an almost Freudian way, any girlfriend I brought home, so I am on the side of the magpie. Even though it is long dead, I can sympathise with its action.

Like with many of my mother’s prejudices, I have fallen into the opposite camp, so I add my voice to the growing dawn chorus cheering these cheeky black and white buggers, not just for their wonderfully evocative flute like yodelling, melodic song, but for their intelligence. From a brain the size of a shelled almond comes smarts at least equal to a dog. Like dogs, magpies that are in close contact with humans, often figure out how to get a percentage of the deal.They are also one of the few birds where the young engage in play, like you see among young mammals . 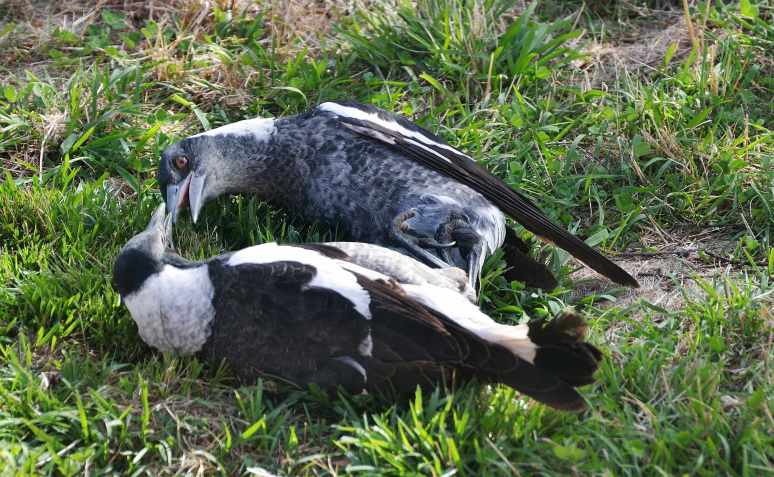 Young magpies playing a leg wrestling game in our yard.

Just backtracking to the bird’s song; it is said to be one of the most complex in the avian world. A British observer has likened it to a demented keyboard, but he would coming from a country where most land birds are small, brown and twittering. I might be wrong but I suspect each magpie family sings its own song, a cascading variation of notes different to their neighbours.

For any non-Australian, PNG or New Zealand readers, I need to explain that the bird I am discussing is not related to the Eurasian magpie pica pica which, a member of the corvid family, is related to ravens and crows. Pica pica is the bird made famous in Rossini’s opera La Gazza Ladra (The Thieving Magpie) where a delectable serving wench is accused of stealing from her employer’s silverware and as was the fate of serving wenches in such opera, condemned to death. After much music she is saved from the firing squad at the last minute when the missing cutlery is found in a magpie’s nest. Rossini did not operatically describe the fate of the bird.

Our magpie (misnamed by the early Europeans) is know for some misdeeds but not theft. It has now, on DNA evidence been recently reassigned to a largely Australian and Indo-Pacific family called Artamidae which includes our currawongs, butcherbirds and woodswallows.

Cracitus tibicen is our magpie’s biological name and they have eight subspecies and two main groups. Here in Melbourne and the coastal region from southern New South Wales across to central South Australia, our birds have white backs from the rear of their heads to their tails- Cracitus tyrannicus.

Inland and across Australia’s north, the birds are generally black backed with only a small white bit across the rear of their heads and neck, a black patch, then a mainly white tail visible in flight. There are regional variations, but these are the basic two types.

Therefore in Melbourne we have the white backs, but if we drive 200 kilometres to our place in the country near Mansfield, which is over the Divide, they are mainly black backs. I say mainly because the mountains are a boundary between the types and here you breed hybrids with varying amounts of black and white back plumage.

There is probably no other Australian bird that so divides opinion, not just because certain sporting teams, most famously in Australian Football, where the most polarising team, Collingwood, have taken magpies as their symbol. They are truly a team that evoke black or white reactions.

But like the team, the birds can be aggressive, particularly in the nesting season when males will attack anything they see as a threat, particularly by swooping or dive bombing. Every now and then the collision causes someone to lose an eye. 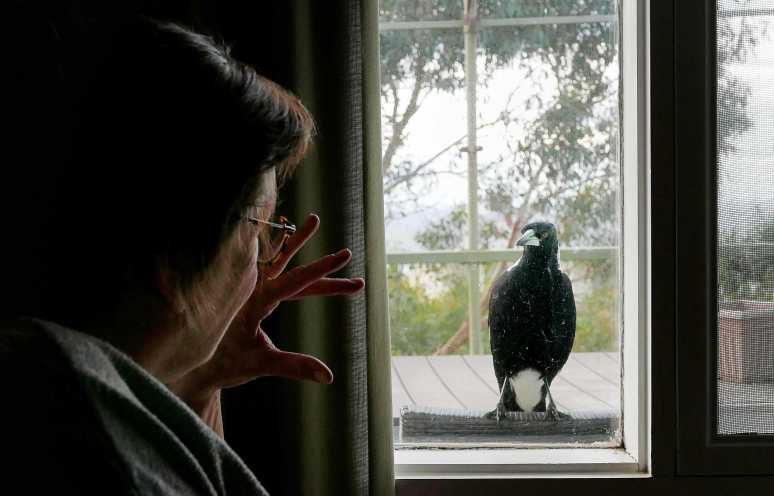 Magpies are not shy and retiring types.

On the other hand there is an opinion (and it is one my experience leads me to believe), that magpies don’t attack people who feed them or provide other desirables such as a birdbath. Magpies are a long lived bird, up to 30 years if they are lucky. Researchers also believe they can distinguish different humans, possibly by face recognition. Therefore it pays to be on good terms with a bird that has both a long life and the capacity to hold a grudge.

My family’s association with them goes back to when we first built our country house, and soon after a magpie plonked itself on the balcony rail looking for a handout. Satisfied we were an easy touch, its entire family soon turned up. But we were then to discover some of the intricacies of magpie politics. They are extermely territorial and family groups fight viciously over what they consider to be their patch. A death in a family can leave them with reduced fighting capacity and their territory susceptible to enemy take over. 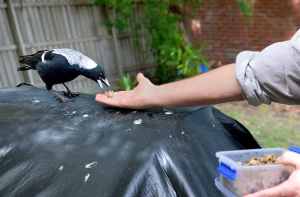 My friend Magda helps herself.

Our house was on territory boundary and because we were good for a feed, it was desirable property. We didn’t visit for a while and when we did, we realised magpie ownership had changed. The uphill family we had befriended, which consisted mainly of females and had become tame enough to eat from our hands, had been displaced by the downhill mob, mostly males and considerably more wary.

This arrangement had a fatal flaw. Downhill’s dominance was only until the next breeding season when the uphill tribe produced more young and had the numbers to recapture us. Then there was a little drama.

It happened during the season for swooping on walking or cycling humans. Normally the birds attack from behind and all the victim hears is the whoosh of wings and the snap of a beak. The telling thing was we had never been swooped up here, giving rise to my theory they don’t attack people they recognise as friends and providers.

But one day with a visiting work colleague and family I was walking down a nearby hill when there was a sudden whoosh and snap behind us. I looked and spotted the culprit flying back to the electric overhead wires. Am I kidding myself that a bird can look embarassed?

I turned to face it and it looked at me for a couple of seconds, then started preening its feathers as if to say: “It wasn’t me.” And we continued our walk undisturbed.

Such is the bird’s popularity, there are websites, Facebook pages and Youtube clips devoted to their antics interacting with people and even dogs they have befriended. One, www.penguinthemagpie.com is based on the story of a storm tossed magpie chick rescued by a young boy from Sydney’s posh northern beaches. It has spawned something of an industry and gained worldwide attention, partly thanks to the skill of the boy’s photographer father. There is now a book, original photo prints selling just below $500 each. Celebrity endorsements are claimed and even mumblings of a movie.

Like my great aunts’ magpie in Brisbane, it seems the now fully adult Penguin flies around most of the day, but lines up at the front door to be let in the house when the family comes home. I have come across magpies with broken wings that have been adopted by people. One I encountered lived with three small yappy dogs and used to run up and down the front fence with the dogs, joining them in barking. Magpies are great mimics.

A less slick website than Penguin’s, is The Magpie Whisperer- www.magpieaholic.com run by a woman based, I think, in the Victorian city Geelong. She posts videos online of the antics of the large magpie family that visits her backyard. She too has cashed in to some extent, offering a book and comic based on her bird experiences. 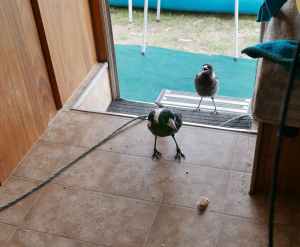 Magpies even in our caravan

All this must disgust the enviro-zealots, especially men with beards and heavy boots in government conservation departments, who like to suppress human interaction with native wildlife. They have failed because nearly everyone I know feeds magpies. One friend in Brisbane’s subtropical warmth, with his kitchen door open much of the year, has magpies fly straight in and sit on the back of his dining chairs for a feed. His wife is less impressed by their droppings but doesn’t discourage the visitors. She is originally from Thailand and apparently sees magpies in her kitchen as just another example of baffling Australian behaviour.

The bearded zealots find it less baffling than infuriating, but they fail to understand most magpie feeding is initiated by the magpies themselves simply by begging at a door or window looking cute. This also gives humans an interaction with the animal world, something remote for many city and suburban people, who make up more than 80 per cent of Australia’s population. Like pets, semi-tame magpies play a role as ambassadors for nature in the court of humanity. So if the prohibitionists want to ban feeding, they need to consult the magpies first. The feathered focus group on our balcony would sing loudly in protest. 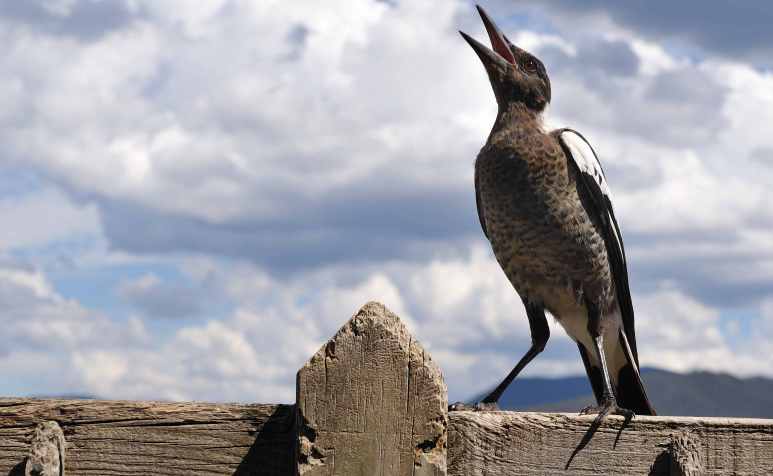 A young magpie in its first year plumage practices singing on our balcony.

One thought on “THE PECKING DIS-ORDER”