Languid days by the bay.

Languid days by the bay. 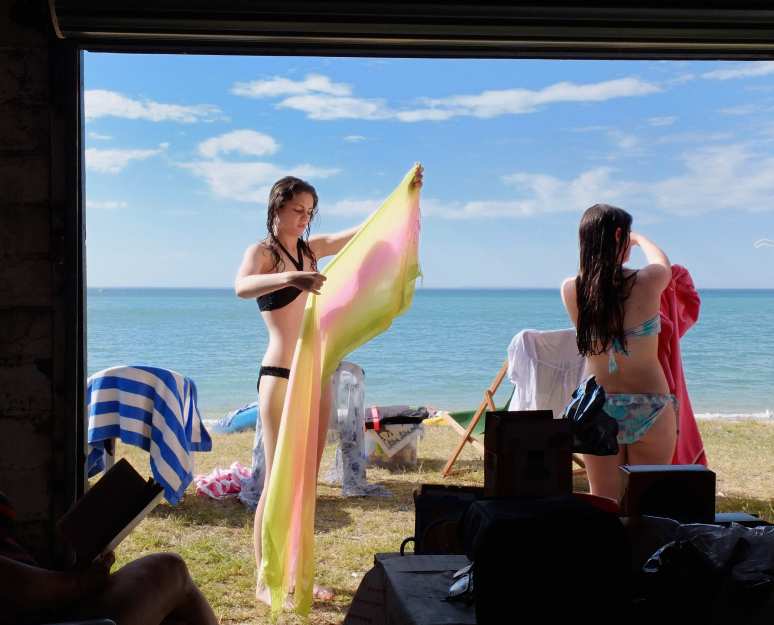 How surprising a shabby concrete shed can have such appeal. It is protected by a bare corrugated steel roof, the inside paint is peeling and it lacks even a single window but we have just spent convivial summer days there with family and friends. Although you enter it through a small side door, the shed’s secret is only revealed by opening the roller door at the other end.

Then the curtain goes up on a whole fantastic world. The opened doorway becomes a proscenium arch that might sometimes frame a setting of golden sunlight and turquoise water, it might show brooding wintry grey or any mood in between. But no matter what season or weather, opening that door always reveals a cream sandy beach, just a few enticing steps away.

When it comes to beaches Melburnians have always suffered an inferiority complex compared with east coast rivals, Sydney and Brisbane. As Australians, it is a serious deficiency because beaches are a foundation of both culture and national identity. Those who can mumble the words of our national anthem, will know it even contains an oblique beach reference- the ”’girt by sea” bit.

Most of the continent’s land mass might be red desert populated by a few grumpy miners, even grumpier red neck farmers, aborigines and visited by sun crazed European tourists, who if they don’t die from heat stroke, do so by leaping into crocodile infested inland waterways.

For us Victorians, there are always the beaches of our east or west coast, places like Lorne, Barwon Heads and Phillip Island which while charming, are also kissed by the Southern Ocean, an Antarctic kiss so nipple tweaking cold that even in high summer, people bathe in wet suits. That leaves us with Port Phillip Bay.

This bay is a huge circle cracked only at the bottom where the Southern Ocean’s water pours in and out with the tides. It is shallow and sandy making that icy water warm quickly under a summer sun. Around the northern and eastern shores sprawl Melbourne’s suburbs. For decades most of us have taken this patch of water for granted, but with travellers returning from overseas realising bay beaches are at least as good as admired places like the Mediterranean, it is at last being appreciated. Our family’s boatshed is on the Mornington Peninsula, an elbow of land on the bay’s eastern side that also boasts decent wineries and a good selection of those ocean surf beaches along its southern shoreline.

A couple of decades ago the shed was bought by my in-laws who lived further up the hill behind the beach. My mother-in-law is still there and for many years elements of the family have gathered each Christmas to New Year from as far away as Adelaide or Canberra and Melbourne’s northern suburbs. We come together in a kind of bayside water ritual, that on a hot day is also being followed by tens of thousands.

Inside the shed there is not much more than some sandblasted furniture and rusty appliances. Each summer we stock it with wine, beer and kayaks. It is easy to launch boats from calm, sandy beaches, but it is hard to ignore the shed’s real attraction- its view and the water only a few steps away.

In colder weather you can sit in there out of the wind and rain. Any season you can watch the ship

s that follow the channel to Melbourne, which comes so close here that through binoculars you can see passengers on the cruise liner decks clasping their drinks and count the containers on the freighters that as a measure of our country’s import addiction seem to come in full and depart empty.

This year also for the first time we dined on an an elaborate meal in the shed- an Asian steamboat heated in the centre of the table with a simple electric hotplate. On New Year’s eve as usual it proved a good vantage point to watch fireworks all around the bay, especially the illegal ones let off along the coast.

For years joyless bureaucrats in government departments, have agitated to have these structures destroyed. Then someone realised they were a distinctive Victorian postcard feature a bit like trams and Melbourne laneways. Overnight they became a tourist attraction and highly sought after by the rich. People put their stamp on their sheds decorating them in bright colors and sometimes adorning them with elaborate illustrations, as has as our neighbor, an art teacher.

Sometimes Muslim women come to our beach, possibly feeling it is safe enough in the calm waters for them to swim in their full gear without either drowning or being ridiculed.

Occasionally dolphins will appear in the water off our shore, more regularly a semi tame stingray used to turn up each summer night around seven to clean up when local fishermen were gutting their catch. It did so until some idiot killed it. Hot weather however attracts even more idiots, usually the kind who ride jet skis which at full blast sound like an amplified swarm of blow flies.

I wonder why we are so attracted to beaches. Maybe something in us is still linked to that primordial moment which evolutionary biology tells us our ancestors first moved out of the ocean to colonise the land. 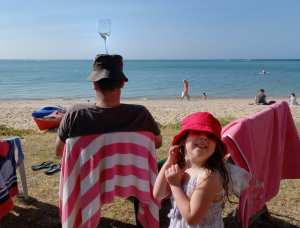 Our celebrations this summer were much more restrained.

To view gallery, click on the first image and then move pictures using arrows.

3 thoughts on “Languid days by the bay.”