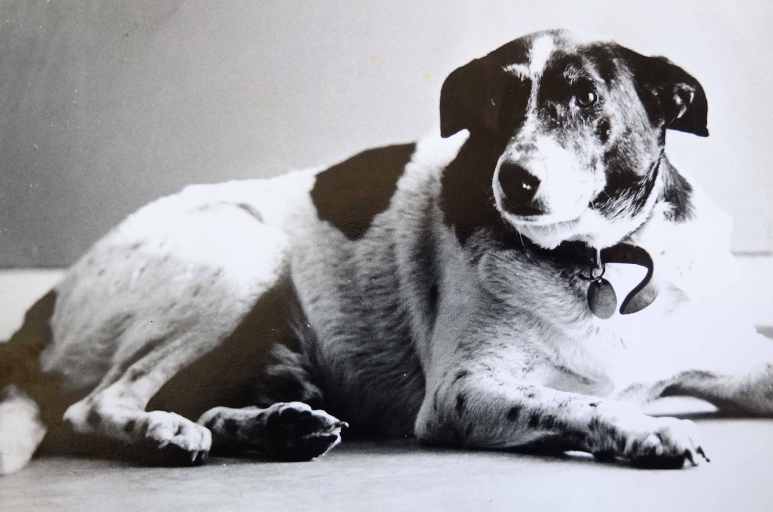 This was first published as a Saturday Essay in The Age newspaper Melbourne on 27 September, 2008. I worked there as a journalist for 21 years until August 2012 when redundancy became too good to refuse. I am recycling it because it talks about very ordinary events that make life seem just that bit more extraordinary

By Geoff Strong.
I was four years old when I crawled into a tiger’s cage. There, in one of my earliest memories, is an enormous yellow and black head that I was trying to caress with my small hand and entice with the soothing words “nice pussy, nice pussy”.
As a small child I had no pets, despite wanting to pat anything with fur or feathers. My parents refused my pet pleas on health grounds, until the day of the tiger. It certainly focused their attention.
Absent from my memory of the event, but etched in that of my late father’s, were the shrieks and gasps from the crowd outside the cage. I also have no memory of what probably saved me from a very abbreviated existence: the actions of a circus trainer who flopped a large piece of meat into the other end of the enclosure.
On the way back to our Sydney home, my parents discussed the incident and the lengths I would go to for animal company. “I think we should get him a dog,” my mother said, putting aside for a moment her obsessive cleanliness and microbe phobia. She probably figured a cocker spaniel would do less damage than a tiger.
The cocker spaniel’s name was Frisky. He was not particularly smart, certainly not smart enough to avoid the car that led him to an early grave in a neighbour’s yard a few months later. My parents avoided getting a replacement, which made me a one-boy canine rescue squad, bringing home any apparently lost mutt I could find, among them one whose fangs made the scar still on my left hand. Dad quietly got rid of them all, saying their owners had been found.
I was eight when Skipper appeared. As a friend and I tore along the street on our bikes, there was suddenly a third member of our gang: a cattle dog-shaped black and white mongrel who raced along beside us. My father made sure the dog was locked from our yard when we went out, but on our return he was inside the front fence wagging his tail. His contempt for barriers should have been a warning. Dad was charmed by his audacity but still said he would have to go once his owner was found. As Dad calculated the dog, who had ground-down teeth, would have been about five when he arrived, that would have made him well over 20 when he departed 18 years on, his owner still missing. 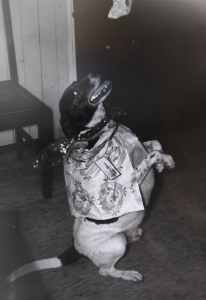 Skipper knew how to get what he wanted.

I chose his name, and not long after his arrival we took him on holidays to a lake on the NSW south coast. Dad was a strong swimmer, while at that stage I could not swim at all, so he conducted a test. He jumped into some fairly fast-moving water, swam out and appeared to get into difficulties. The dog watched the swim with concern, but the difficulties were too much. He yelped, jumped in, swam out and grabbed Dad by the trunks, trying to tug him back to shore. That sealed it, despite the teeth-holed togs, Skipper had endeared himself to my father beyond question.
“He’s a smart dog,” Dad would boast to anyone who would listen. Smarter probably than even he realised. For starters there was the matter of Dad’s occupation. The cunning mutt had got himself adopted by a butcher, guaranteeing a lifetime supply of fresh meat and quality bones.
Then there was the matter of the front fence, which he crossed when he wanted, as easily as humans would use a gate. When he jumped to the other side, he could be away for days maintaining his alpha-male status and returning exhausted with a torn ear, a savaged front paw and once with what Dad reckoned was a bullet shot through his rear-leg muscle.
High gates were erected to stop him getting to the front, so he simply crawled over the side fence. Dad installed a line of barbed wire along the top of our perimeter. I was embarrassed to bring friends home to play in a yard that looked like a prison camp, but still the dog disappeared. My father was being outwitted, but how? 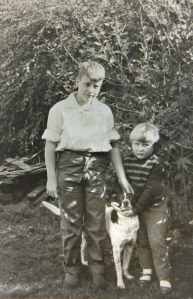 Skipper with my friend David and his sister Bronwen, after he had jumped into their yard.

One day he called me to sneak down the back, hide behind a bush and watch. There was a gate into our neighbour’s yard secured by an old iron sliding hasp. I saw this happen: Skipper lifted the hasp lever with his nose, slid it across, opened the gate with his paw and vanished.
A lock was placed on the gate, but he still escaped, tearing bits of fur and flesh on the wire. Dad was embarrassed by customers in his shop telling of seeing the dog suburbs away. He once turned up at my school, pretending not to notice me, and in one case a woman delivered a boxload of very Skipper-looking puppies. I never found out what happened to them.
For all his faults, Skipper was a great companion. He would chase anything, play with anything and accompany me and my friends on any adventure.
My father was amazing with animals: dogs loved him, he tamed a sparrow, budgies kissed him on the cheek and he easily taught Skipper tricks; it seemed he could get the dog to do anything. It was like having a circus acrobat in the family. 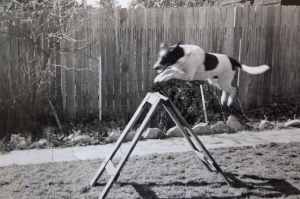 We moved to Brisbane when I was 13, and soon our area began being populated by little Skippers. This went on until, about the age of 15, he became too weak to scale the fence. But if he met a female dog on a walk, he would still offer his DNA. I was 25 when he died. Blind and deaf, he still managed to climb the steep stairs of our high Brisbane home, until one day he fell.
In retrospect, I never understood why what could be described as the root-causes of Skipper’s problem were not snipped off by a vet. Neutering back then, Dad said, was done to female dogs and cats, not males. But I learned from my mother the meaning of the noun “reprobate”. This did not apply to my father, a quiet, teetotal family man. Maybe he was vicariously living a double life through Skipper. Maybe there was a tiger in him after all.
Geoff Strong is (was) an Age senior writer.

One thought on “A BOY’S BEST FRIEND”