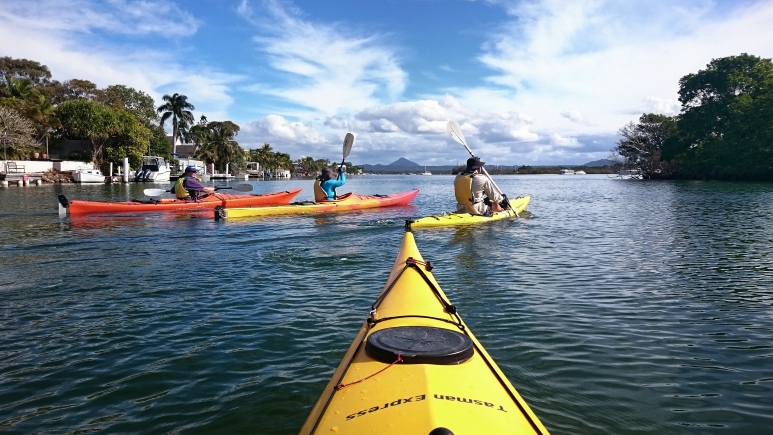 What is it about our attitude to time? How many of us can genuinely say we live in the present, or do we tend to dwell on the past and either anticipate or dread the future? Is it possible to live in the present at all, given our senses only record our body’s signals nano-seconds after they happen, making our consciousness of the present always slightly delayed?

I suppose we do live in what we consider the present in times of fear and anxiety, when faced with death, when we find ourselves in serious trouble like having just realised we are badly injured, or something like being close to drowning. 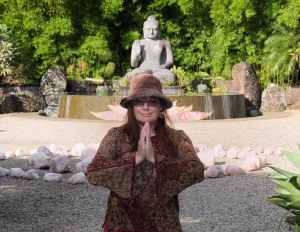 Jill reprises her hippy past at Byron Bay.

Fortified by youth’s hubris, I nearly drowned in my teens on a Gold Coast beach after becoming exhausted in the surf, unaware of my limitations. I was rescued by a life saver. Even now 50 years later I can still remember the moment when I thought that moment might be my last.

We are now more than two and a half months into our planned two month caravan trip. Slowly up the east coast we have arrived at what is the elliptical trip’s furthest point from Melbourne, or in astronomical terms its aphelion, where we have parked our caravan in a friend’s yard at the Sunshine Coast resort town of Coolum. Like the aphelion in the earth’s solar orbit this is the furthest point from our sun- Melbourne.

It was April Fool’s Day when we hooked my ageing Subaru Outback to the much older Windsor van and left Melbourne. Maybe that date had something to do with the confused sense of time I feel living in this two wheeled suitcase. For all but three nights we have slept in it, with Astro the dog tucked in beside our bed. It is beginning to take on a strange sense of normality. Sometimes it seems as if our past life is very distant, our house in Melbourne is a foreign country and time is jumbled. Have we been on the road for years or only for a couple of weeks? I sometimes confuse events and places from earlier in the trip as happening before we left home. 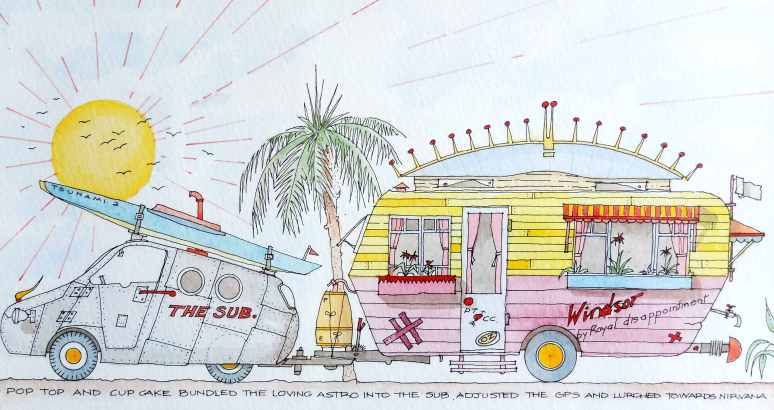 Our friend Colin Burley’s perceptively ironic take on our trip. His wife Julie appears later in the blog.

Most significantly I am conscious of a phenomenon that is similar to the intense feeling of present that comes with fear and danger, but is triggered by the complete reverse- happiness, excitement or achievement often set off by doing something or being in a place long wished for or anticipated. At these times I note that, yes, I am alive and I am doing whatever it is that gives me satisfaction. Fortunately this sense has come to me a number of times on the trip, while the ugly one has so far happened just once.

Since the last blog from South West Rocks, we have spent most of our journey with the van parked in the yards of friends and relatives. 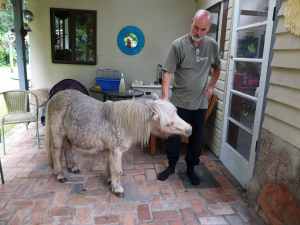 Mick with Chester the horse.

Near Grafton we stayed with Jill’s brother Mick, his wife Pam, their several dogs and a miniature horse called Chester in a garden created over 40 years, deep in the forest. Mick plays in a rock band on week ends. 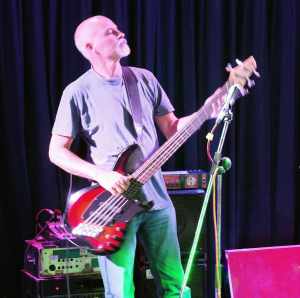 In Brisbane our van park was a beautiful subtropical suburban garden beside a rocky creek, that regularly floods and threatens our friend Judy’s very sensuous and fragrant clinic where she runs an acupuncture practice. Astro also took a delight in the clinic and possibly the companionship of her equally old dog Max, to the extent he virtually moved in, acting as tail wagging ‘meeter and greeter’ to her clients. 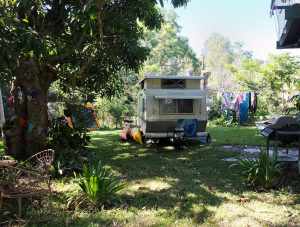 In our friend’s luscious Brisbane garden.

From this garden, we were able to take the three day non-caravan holiday on nearby North Stradbroke Island.

I have been visiting this island since I went there on a day boat trip with my father around 1964. Subsequently friends have settled there. We took our kayaks because I have thought the waters looked very kayakable. Unfortunately the coast waters around Point Lookout where we stayed were very unkayakable for those three days so we drove to the west of the island at Amity Point that faces Moreton Bay.

Jill decided the conditions still looked too formidable for her, but just as we were launching my boat, a guy came over thinking we were a missing part of his group. I hadn’t noticed until then there were about a dozen sea kayaks on a beach further along preparing to set off. They were the Queensland University Sea Kayak Club on a paddle to the nearby island town Dunwich about 10 kilometres south.

I asked to join them and the leader agreed provided I could paddle at least five kilometres an hour. I responded that I had clocked myself at nine in my Tasman Express, over two hours. We set off with a surprisingly fast tidal current in our favour. They expected the trip would take more than two hours.

Astro takes a break from his greeting duties in the clinic.

I had come across a blog written about this club’s activities and I’d been interested in it partly because it was my old university and because they wrote about paddles on waterways I knew as a teenager growing up in Brisbane; particularly Moreton Bay and the Brisbane River where I had rowed in my high school, Brisbane State High’s, rowing team.

It was serendipitous that I had stumbled on this club outing because I had often fantasised about taking my kayak to the places they went if I could ever get it to Brisbane, which seemed unlikely until this trip.

They were a friendly bunch and I found myself talking to a guy who had a kayak similar to mine and was the university’s head of mathematics. There was another bloke with a very fast looking boat called an Arctic Raider, who ran a research station on the island and a woman with a German accent whose husband works at the university, and she had a boat the same as an old one we have as a spare back home. The sea for most of the trip was merely heavy chop except for a solid following swell that built up for a while around half way. 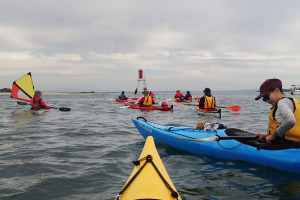 The trip with the university kayak club.

I have never paddled with a big group before and it is good way of comparing your technique. I found my kayak was possibly faster than most of the others and that in moderate conditions I was able to power ahead of even the fastest boats, but when it came to the swell the German woman and the guy from the research station were able to easily surf away from me. With the strong tide the trip took a little more than an hour, still it was great fun and I remember sensing I was having a living in the moment experience.

In a similar way I fulfilled another long held fantasy later that week, paddling the city reaches of the Brisbane River, a place much changed from my schoolboy rowing days. 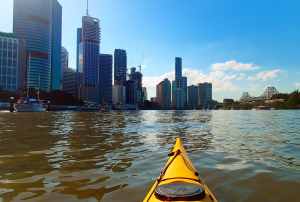 Another old friend Jimmy, drove my car down to a park in a tributary stream called Norman Creek where they have a very snazzy kayak launching and retrieving pontoon, the only one I have ever seen.

There were subsequent kayak trips when we reached the Sunshine Coast, one which although short, proved very influential in my thoughts about living in the moment. 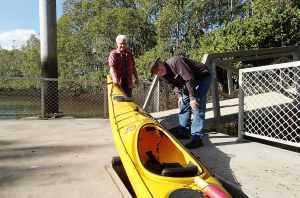 Hastings Street at Noosa Heads fits into the axis of self assured wealth that extends to our Toorak Road and Chapel Street in Melbourne and the Victorian beach resorts of Portsea and Sorrento. But its sub tropical warmth also plonks it into the continuum of prosperity that opens its doors to well-off tourists in the better parts of Bali.

It was on the beach that runs parallel to this street on the ocean side and on the other, a canal built for property developers, that I experienced both one of the most pleasant and the most chastening experiences of the trip. The pleasant happened on the canal side, where Judy (the acupuncturist) and her bloke Martin, hired some kayaks and joined us on exploration of the Noosa waterways.

Noosa holds a special place in the memories of Judy and I. In 1975 we had with four others (three couples) camped (illegally) at Alexandria Bay the most easterly beach in the Noosa National Park. There was a bit of a hippy colony at the southern end of the beach and in the spirit of the age we spent our entire time nude. That was illegal too,as it still is in Queensland but for some reason the local police still turn a blind eye. They did however ban camping there a couple of years later. 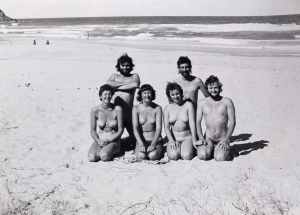 The bare facts of our 1975 Noosa holiday.

Although none of the couples are still together, we are all more or less still friends, except for my partner at the time who has since died. Judy was planning a get together at her Coolum place with Julie, another member from those sun warmed days, along with her husband Colin.

I had always fancied kayaking around the beautiful national park and photographing the beaches from out at sea. I decided it would be my contribution to the nostalgia. I picked what seemed the best day and took my boat to the main beach near Hastings Street. Jill declined to join me and with good reason. I was nervous because I had never launched through serious surf before and the waves were bigger than I had expected. As usual I wore my spray deck to stop the cockpit filling from water coming over the boat.

The launch from the beach went well and I powered through around six breakers until I reached a sand bar where the waves were rising about two metres high before breaking. I wasn’t quite straight as I hit the base of the dumping wave which grabbed the front of my boat, capsized it and threw me out washing me back to shore in front of Jill and a small crowd I wished had not been there.

I got back to shore OK and Jill suggested I try again, but I noticed the same waves at the same point and I could not figure how to get through them. It was my moment of failure, which if I am realistic is reasonable in someone about to turn 65. I can remember hitting the wave and pushing the boat back to shore, but I can’t quite remember the moment I was thrown out of the boat.

In my attempt to create something new to amplify a halcyon memory, I had bombed out. I felt somewhat ashamed, and certainly crestfallen. But then I realised living in the moment is only of any use if you can remember it. It is our memories that are truely useful.