THE GODS THAT CAN STOP TRAFFIC.

To the temple in the mysterious evening light.

We were told the new pura (temple) was positioned for maximum visual impact.

Bali’s colourful brand of Hindu religion, is one of the most distinctive and attractive features of the island, appealing to the sort of tourists willing to venture beyond the tacky beach strips around Kuta and Nusa Dua. It remains appealing until those same tourists are caught up in the rock solid traffic jams caused by the endless cycle of festivals and ceremonies this religion demands.

The much loved Barong.

You can be driving along a busy highway and the traffic comes to a stop because at a roadside temple, people have spilled out and are sitting on the roadway watching the events inside. In the accompanying photo, a procession on one of the island’s busiest highways near Amlapura in the east, was followed by about a kilometre of crawling vehicles. 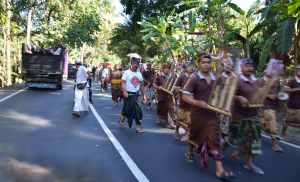 Even traffic must stop for the gods

It all goes to reinforce an observation by a writer I once read, that the main occupation of the Balinese is being Balinese.

A few nights ago we noticed some goings on in a new and very grand temple (or pura) complex that has just been contructed in nearby Ubud, beside the river at Tjampuan. It is elaborate and extensive, cascading down the hillside in view of the bridge heading out of town to the expensive restaurants and hotels in Penastenan and Sayan.

We had our temple visiting gear in our car to allow us to go in for such an occasion- a temple sarong and waist band for both men and women and a Balinese head dress for men. It is kind of the reverse of Islam in that the men must wear a head covering in religious ceremonies. The women do cover their heads in a sense, balancing them with offerings. The dim lights and music made it a mystical experience.

The temple is known as the Ubud Gunung Kebah and there has been a smaller shrine on the site since the eighth century. The site has important significance at the junction of two streams with supposed healing qualities. On that night different groups complete with their own gammelan orchestras, barongs and other ceremonial beasts, seemed to taking it in turns to use the place for the same ceremony.

A Balinese temple and its equipment.

The following night we were trapped in a long traffic jam as a procession to the temple containing hundreds of people and all of the above ceremonial objects, paraded along Ubud’s main street. The night after that, we were stuck on the Tjampuan bridge during a change over, as one group left to walk back up the road out of town and another arrived from the opposite direction. 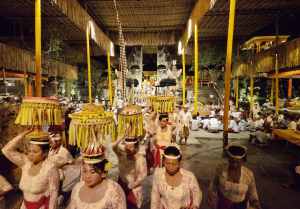 Women only cover their heads with offerings.

There seemed to be thousands of people involved and the temple was packed.

The spectacle demonstrated two things. The Hindu religion, that used to cover most of Indonesia until dreary monotheistic Islam took over in the rest of the archipelago, is still very alive in Bali. Its strength is also possibly driven by a need to demonstrate resilience in the face the Islamic monolith in the rest of the country. The other thing is that tourism appears to be pouring enough money into the area to build a new structure like the Pura Gunung Lebah.

A dog makes his exit.

There was one curious twist however. Balinese temple ceremonies can go on for a very long time. Village ones we have attended have ended very late in the night, but we were perplexed that this one finished at the comparatively early hour of around 9.30. Then it became clear when it was explained that the owner of the expensive Hotel Tjampuan that overlooks the temple, had donated generously to the building works. It would make sense if that donation included an understanding that temple proceedings not go too late.

All over surprisingly early.

This would help feed the tourist industry, providing hotel guests dress circle seats over picturesque local culture without doing too much to disturb sleeping patterns.