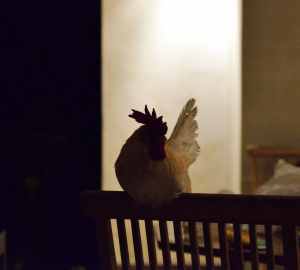 Have you seen this bird?

This is the last known photograph of the chicken who adopted us when we arrived at our rented Bali house earlier this week. It was taken after he had decided to roost for the night on the back of this outdoor chair and was nodding off to sleep. The next morning he had vanished, the only sign, some droppings on the terazzo floor. The rice we had left for his breakfast was untouched.

His appearance, is subject of an earlier blog, but the surprising thing about his disappearance is we miss him. It is nice to have an animal that wants to relate to you- a little scrap of life that reminds you that you are part of something more than just the human plague, but there was more. What surprised us most was just how smart he was- how quickly he learned things. This bird was certainly no bird brain.

Here is an example. On the first day he was obsessed with the kitchen and we could not leave the door open or he was in. When we came home after visiting a restaurant in the evening, we found he had snuck into the kitchen and was asleep tucked into a corner on the floor. He was shooed out the door.

In the morning dropping evidence showed he had spent the night perched on a little stool outside our bedroom door. Chicken shit for the soul perhaps? We wondered if a chook has the ability to form an attachment to people? It was enough to bring on an eating disorder such as vegetarianism.

The following day we found we could leave the kitchen door open and he made no attempt to get in. He apparently realised the door was forbidden, but it did not stop his desire. Using what must be chicken logic, at dusk he tried to fly in through a window right next to the open door. If the door was banned, no-one had told him he could not use a window. Unfortunately it was closed and he knocked himself out on the glass.

Regaining consciousness he spent half an hour cadging rice grains from the floor around our dinner table before settling on the back of the chair.

Where did he go? It is possible he flew back over the neighbour’s fence he probably came from, but unlikely he would have done so without first polishing off the breakfast rice. There are feral cats around and possibly one got him but there were no feathers.

There is one possible witness. Nyoman is an elderly local who sleeps in a cabin on the property as a kind of night watchman. He took a great interest in the chicken when he first appeared and may have seen something when he left to go home at dawn.

The chook was too puny to make it as a Balinese fighting cock and might have flown here from over the fence after being persecuted by bigger tougher roosters. His fate was probably to end up in someone’s cooking pot.

In a village like this there is little room for silly western sentiments. Food is important and you don’t pass an opportunity. As I tap this keyboard our chook is probably the source of a warm fragrant cooking smell in some humble kitchen.

Postscript: when we asked Nyoman, he indicated the bird had flown back over the fence: probably propelled by a swift kick of his thonged foot when he saw the droppings on the floor. For future roostings we had planned to cover the chair and floor with plastic Bintang supermarket bags.

It is funny that we both admitted to feeling depressed that this littlle ball of feathers was no longer clucking around our feet. But as I said about childhood dogs in the earlier blog on this subject, when one animal departs from your life, another seems to sense a vacancy and moves in to fill it. Enter the frog. 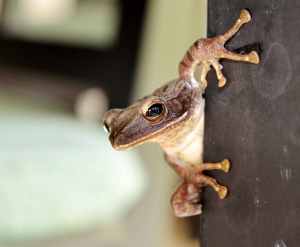 I suppose it is not suprising that in a place called Frogsong Villa, there should be a mascot amphibian, but to find it inside your swimming togs as you are about to pull them on, is a little discomforting. In Australia we refer to this form of brief male swimear as “budgie smugglers,” due to the shape of the bulge in front when worn by normally endowed men. Our prime minister, a kind of antipodean Vladimir Putin, is famous for showing off his bulge in them. To suddenly find you are wearing “frog smugglers” has a totally different effect.

The frog suffered no ill effects and continued to hop around the furniture, at one stage landing on my leg.

The other bit of interesting wildlife to join us was a very brightly coloured fly, but neither it nor the frog could make up for the missing chook.