A local and a global ritual.

Among the joys of renting a house in a Balinese village is you can, if you try, get to interact with the locals. This is our third visit to Kelusa and on previous visits we have come to know the Tirta family who live over the back wall. Jill even has regular contract with one of the daughters on Facebook. Wayan, the dad, used to work cleaning and maintaining our house but on our visit last year they had just opened their own business, a laundry. (See previous blog- Mantra for a washing machine).

Wayan no longer works here, he says his business takes up much of their time and there is a lot of work, although he admits it is not making much money. But being Balinese there is always plenty of other village work on top of the domestic. A couple of nights ago it was the Odelan festival for the village temple (Pura Desa) devoted to the Hindu god Brahma. Wayan plays in the gammelan and we were invited, the only foreigners there. 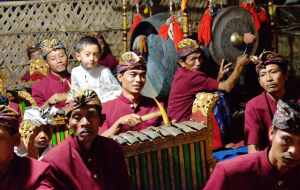 There was lots of gammelan music, dancing by local girls, a ‘topeng’ performance by local men, blessing by priests and a considerable amount of sitting around doing not much. It went on for four hours and everyone was dressed traditionally for the occasion, including us. There was one curious note however. During the entire event a child’s balloon hovered over the audience with a scowl of disapproval. It featured a logo that seemed so far away both geographically and culturally. Here in the tropics, in the midst of this ancient ritual, was the face of the Angry Birds computer game originating half a planet away in icy Finland. 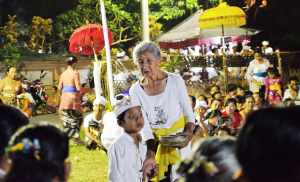 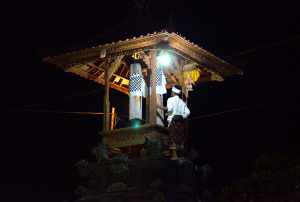 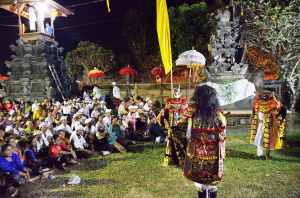 One thought on “A local and a global ritual.”