A mantra for a washing machine.

A mantra for a washing machine

Let’s face it, travel is a competitive sport. Among a certain demographic that is. It is particularly so among those like us, who snobbishly avoid the packaged and the touristy, to be able to boast about experiencing the “authentic”.

In Bali, that is not always easy. It is after all an island that earns the bulk of its income from tourism even though the bulk of its population still toils in the ricefields. Therefore we can feel mightily superior that in the 20 years we have been coming, we have been invited by local people to a wedding, two cremations, various temple ceremonies, a pig slaughtering and a ceremonial cockfight.

However I think our latest invitation beats the rest combined- the ritual opening of a laundry and the priestly blessing of two washing machines and a tumble dryer.

It is one of the curious characteristics of this tiny slice of Indonesia that despite the changes that are chainsawing and bulldozing the island to its idea of the 21st century, it somehow manages to do it in a distinctly Balinese way.

A few years ago I read a book on Bali by retired Australian journalist Cameron Forbes that included the memorable observation: “the main occupation of the Balinese is being Balinese.” It is probably true, but it is an indication of what an astonishly industrious people they are, that they manage their obligations and still find time to do their jobs,whether they are growing rice, carving tourist trinkets or making beds in a Nusa Dua hotel.

The laundry blessing ceremony took place at the home compound of our neighbours, the Tirtas who live on the other side of the wall to the house we have rented in this Balinese village about a 20 minute drive north of Ubud. It is an entire extended family. One of the components of this group is Wayan and Ketut with their teenage daughters Putu and Kadek and five year old son Komang.

Like many Balinese men Wayan does a range of things to make money, one of them is to help maintain the house we are renting, which is owned by an American woman. His latest venture is the laundry which is partly at the front and partly inside the home compound. Two large twin tub washing machines are inside while the electric dryer takes pride of place in a purpose built white tiled concrete room facing the street.

When we were invited, it was in this room that the ceremony was being conducted, the washing machines having already been sanctified. A local priest was sitting on the floor reciting a mantra surrounded by baskets of offerings, family members joining in at various intervals, and a dead chicken lying on a palm leaf just outside. As we would see, its life had been curtailed to ensure clean sheets and towels for the village.

While this was happening a small truck arrived carrying the metal shutters to be rolled down protecting the building’s contents. It immediately became stuck in a drainage ditch. When it tried to back out it ripped off its front bumper and then got stuck again. I joined the men who ultimately successfully pushed the truck out. Through all this the priest kept up his incantations. This went on for about 45 minutes during which Wayan dug a small hole and buried the chook and then joined the rest of his family in prayer while his mobile phone went off. With the laundry fully blessed, we went round the back to join the family for lunch. 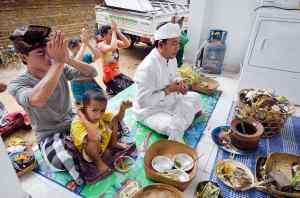 With all this over I was perplexed by something that happened two days earlier. When we flew over to Bali we brought a bottle of my favourite Australian wine, Chambers Riesling, produced by a small family tin shed winery in Victoria’s Rutherglen. We drank the wine on an auspicious evening and were surprised to find the empty bottle missing the next day.

It appeared when we walked around the corner and found it sitting on the newly completed floor of Wayan’s laundry. I was even more confused when I asked and Wayan replied: ”I don’t drink.” OK I thought but he does smoke, not realising he had probably mixed his English tenses. We assumed this later in the evening of the blessings, when driving past in our car, we noticed Wayan and his mates in the laundry, having successfully installed the shutters, were relaxing and celebrating.

They were also drinking a clear liquid from recycled drinking water bottles and were in a form of jollity that usually doesn’t come from drinking bottled water. I have the drunk a clear Balinese liquid that has that effect. It is called arak or to westerners “jungle juice.” Given the price of wine in Muslim governed Indonesia, what Wayan probably meant was “I haven’t drunk (wine).”

The night of the laundry ceremony we were lured by music from the village on the opposite hill (which I referred to in an earlier blog). It turned out to be a huge temple ceremony called Odalan or the temple’s birthday, and happens every six months according to the Balinese calendar.

We were the only westerners, and although I did get told off by a priest for standing in the wrong place to take a photo, people were friendly and talked to us. One woman there had come all the way from the coastal resort town of Sanur where she works in a shop selling sarongs to tourists. This was her home village. It was a big ceremony. There were two gamelan orchestras in different parts of the grounds, one of them complete with a display of topeng dancing. In another part a priest chanted a mantra over a public address system and in the centre thousands of docorative offerings, each to be taken home by its owner at the ceremony’s end.

Like the ceremony at Wayan’s place earlier in the day, this too was a window into a world that despite the changes foisted upon it, remains resolutely determined to continue being itself.

Note: to view gallery click on a picture and navigate using right or left arrows. To return to blog click on the small x in the top left black.