Sometimes it is taking note of the very little things that brings out the very biggest surprises when you travel. Such a surprise happened one afternoon when we returned to our rented Bali house. The place is called Frogsong Villa, and despite having the usual attractions of pool and garden, is somewhat different from the outbreak of villas, often adding the term “spa” to their title, that have appeared like a skin disease among the smooth rice fields abutting roads in the prettiest parts of the island. 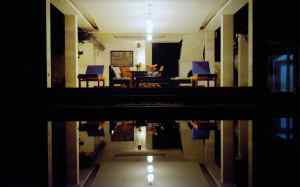 Indeed Frogsong doesn’t advertise its presence at all. Instead it hides in a quiet section on the edge of an equally quiet village, and does it so quietly, even many village residents don’t know it exists. The access road doesn’t exactly trumpet that it leads to an establishment of western comforts (with Balinese overtones of course). It is a track so rough we were limited in our choice of hire car to something with enough clearance not to disembowel itself on the rocks and with tires wide enough to pull itself out should the road become a muddy mess in the rain.

For most of its use this road is just a single track worn down by foot traffic or motorcyclists seeking access to the rice fields and the deep river gorge where there are a few small rough houses with neither electricity nor running water. One of these we were surprised to find is inhabited by a young woman who teaches English at the local school. We met her, and it would seem teachers in Indonesia, despite their respect in society, are relative to that society, as financially badly off as in Australia. But she is not the point of this story.

At the end of the rough track, which runs a couple of hundred metres, continuing straight ahead will plunge you downward to the river, partly via a set of carved steps. Turning 90 degrees right at this junction will point to our place, announced about 30 metres away by a typical Balinese pillar and plinth doorway with a wood shingled roof and reached by a set of steps. There are little water features on either side with frog sculptures and decorative water plants.

On the first of our two visits here in 2011, this forecourt was just a muddy extension of the rough track, but in the last few months the owner, an American woman, has had the forecourt and a small section of the track paved with cement blocks. It must be the neatest fragment of road in Bali.

The curious event I mention at the start of the story happened on this piece of paved forecourt and involved two dogs and two chooks. I probably shouldn’t describe these birds with the Australian poultry vernacular. They were nothing like the caged, force-fed factory farmed prisoners that are production lined slaughtered and end up packaged in plastic on our supermarket shelves.

These were among the freest-ranging poultry on the planet. They were fully grown young males with shiny dark feathers that flashed red, gold and green in the sunlight and their heads were capped by bright red coxcombs. The strange thing was they appeared to be wandering around in the company of the two dogs.

Most dogs I know would find it very tempting to at least chase any chook they came across and some would attempt to rip them into a mess of guts and feathers. In our last visit before we both suffered leg problems, Jill and I used to regularly walk around the village, our unusual appearance and no doubt smell, arousing an angry chorus of barking from just about any group dogs we met. Now we get around in the car, but if the windows are down and the dogs can smell us, the reaction is the same.

One of the dogs accompanying the roosters, I had noticed in the village, a mostly white female, she had distended udders from being permanently pregnant, but her most distinctive feature was a dark marking around her right eye, as if someone had given her a shiner. She was accompanied by a young black male.

The dogs were sniffing around the forecourt when we appeared in the car and most surprisingly the didn’t bark. They came right up to investigate, looking at us curiously, and maybe their silence was due to a sense they were on our territory, not the reverse. But the silence did not extend to the roosters, who stood behind the dogs, crowing, each one in turn. They, not the dogs, were the ones who seemed to be defining territory.

And then the four of them strutted off back along the rough track like a bunch of mates, two dogs and two roosters, in a group together, the dogs sniffing the roosters pecking.

Of course being a rooster in Bali does come with drawbacks, the local gentleman’s sport of cock-fighting being the principal one and this village is big on cock fighting because each year at the time known Kuningan, it holds the only legal and officially sanctioned cock-fighting festival on the island. Of course it is done under the cloak of religion and is held in the grounds of one of the village Hindu temples. We were there to witness it last visit when roosters were brought from all over Bali to have small knives strapped to one of their leg spurs and then plonked into a circle of saronged men to rip each other to bits until one was either disembowelled or so cut up it bled to death. The outcome of the fights were bet on, and watching them is not for the squeamish, but at least the owner of the losing chook has something to take home and put in their pot.

What we put in our pots in countries like Australia are mechanically raised and mechanically slaughtered. Here even the roosters destined to have their guts ripped out in a fight, have at least enjoyed something of a normal life. Our neighbour Wayan has a fighting cock which he proudly shows off and like most Balinese men, I’m sure he doesn’t wait for the one ceremony a year.

We share the house with a number of wild and semi-wild creatures. There is a family of very scrawny feral cats that seem to have made their home in the shrine up the back. Every Balinese Hindu house has one of these and ours is tended by a local woman who comes each day in full ceremonial dress with rice filled offering baskets that the cats gobble up along with any suitable waste we throw out in the compost.

Another pair of co-habitants are two giant geckos that seem to have staked out different parts of the roof space. We don’t mind them but more sensitive types might be appalled by their extraordinarily bad language. In the evening they begin their calls with a sort of chuckle, a bit like the wind up for one of Australia’s most distinctive birds, the Laughing Kookaburra. Unlike the birds these lizards don’t go on with a joyous belly laugh, quite the reverse. After the warm-up they launch forth with a refrain of what sounds uncannily like the words: ”Fuck you!” repeated up to six times. If I had known that was how they felt, we might have considered staying elsewhere.

But there is one other even smaller thing that has gained our attention while we have been here- an ant. It is a medium sized black ant with a habit of zooming along the stonework on one side of the swimming pool sometimes as frequently as every 10 minutes, rushing from a clump of bushes at one end to something in the grass near the pool’s further end. We named him Astro Ant after our dog at home because while tearing along the side of the pool, he seems easily diverted and goes over to investigate anything of interest he spots on his journey. Why do we believe we sighting the same ant? We noticed that unlike other black ants, this guy had an unusually shaped abdomen (the round bit at the rear) which points downward rather than outward like others.

Our time here has been so languid, that Jill reckoned we have measured our days not by coffee spoons, as did J. Alfred Prufrock in T.S. Eliot’s celebrated poem, but by sightings of Astro Ant. Little things of note don’t come much smaller.

Note: To view the gallery at the end of this story click on a picture and navigate using side arrows. To return to main text click on the small x in the black on the top left.