The bible refers to a snake being instrumental in our alienation from the primal  paradise called Eden. It doesn’t mention a chainsaw. Even serpents must retreat from the two-stroke choir that wakes us some mornings in a place that should be Earth’s closest approximation to the creationist’s ideal.

Let me describe my surroundings. We are in a garden overlooking a large clear pool. The plants are lush and multi-coloured. There are orchids in flower growing on tree trunks, decorative red bananas, epiphites like birds nests and stag horns, various palm trees, ferns, figs, plants with bright red leaves, others with leaves that begin green with yellow markings and then turn red and orange with age.

The garden is neatly clipped, swept and walled to shield it from the wildness, agriculture and commerce that goes on outside. It overlooks a deep jungled river valley across to a ridge where a small town of rusty roof iron, concrete walls and open drain slumminess clings to the other side as a kind of human counterpoint to our protected almost perfect world.

Despite its ugliness, sometimes a kind of sublime music wafts across from this opposite town- metallic tinkling rhythms, backed up by deep gongs and drums- the kind of sound that would have pumped fears of sinful idolatry into the hearts of 19th century Christian missionaries. Today all over this island the descendants of those bigots come in their thousands and buy tickets to enjoy tourist performances of  musical savagery. 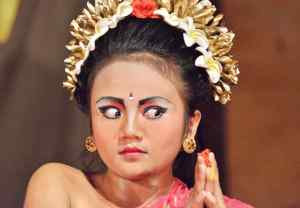 The house we have rented overlooks this garden, pool and valley and is fairly typical of the kind of place westerners like to build themselves in Bali. The lower level, all smooth terrazzo flooring, contains the lounge and dining areas and is open to the Bali breeze which mostly seems benign in this spot, about half way up the most active of the island’s three volcanoes. The earth occasionally moves, shaking the building and sloshing the pool. Air conditioning is unnecessary and most of the time the air seems moist without being oppressively humid. It is friendly, except when the wind comes from the south. This wind brings with it a harsh dry earthiness from the vast Australian landmass, that despite being delivered across the Timor Sea, the air has been unable to shake off.

We notice it as a slightly unsettling reminder of our homeland which we have abandoned for three weeks to stay in this garden or occasionally to move into its surroundings via the small car, resembling a toolbox on wheels, which we rented.

Our arrival in Bali began as what might have been a tourist’s nightmare. The rental car I had been negotiating by email for more than a month, did not turn up at the airport, nor did representatives of the company. We waited two hours then trudged across to the old terminal to discover the car hire we had been told about, only did chauffeured Mercedes limos. They pointed us to the shop next door where we were asked where we were going. When we said the village of Kelusa, it turned out the guy was not only from the village, but the street behind our house and was close friends with our neighbours. Not just that but Jill had been in email contact with his brother. It was a strange moment of serendipity in an island with the population of Singapore or Melbourne.

They organised a taxi to Ubud where we ultimately bargained a better price for a car than we would pay had the airport deal come off.

Jill’s emailing to the neighbour’s friend’s brother had been to ask about new tourist ventures in the village since our last visit. We came here in 2011 and I had written a   story about the charms of real village Bali as opposed to the boozy beach-side resorts most visitors favour. The piece featured Kelusa and was published across Australia by the Fairfax media chain where I worked for many years.

I sometimes wonder if stories about paradise are a good idea. It seems inevitable they can be counter-productive. I am not referring to the Kelusa Village Experience, which locals have set up to cash in on disillusioned visitors to Ubud. Their enterprise is possible because Ubud, the self proclaimed culture capital of Bali, has now in parts been Kuta-ised with loud music bars offering wide screen happy hour live football finals attractions.

The bigger change I am referring to caused shock on the first night of our return. It came driving down a steep road past some rice fields on the edge of Kelusa. On the village side last visit, there was just a steep hill covered in wild jungle.This time that hillside was lit up as if an cruise ship had crashed there with all lights ablaze.

A brand new clutch of luxury tourist villas now spills down the hillside complete with fancy entrance and security guards. It was built by Balinese money and overlooks the rice-fields, which structures like it, across the island, are threatening. Ironically by making the rice-fields the focus of its outlook it serves to idealise the very lifestyle it is helping to wipe out. Locals seem to love the thing and show it off with pride. It has provided jobs and opportunities. Now opened in the streets outside, is a row of warungs, a small supermarket, a laundrette and even a little restaurant to hopefully cater for the villa’s staff and perhaps the well heeled clientele going native. All this in a village that hardly boasted a shop on our last visit.

The floodlit stone carving on the road announces the place as “Jiwaklusa,” which when we visited had been open just two months. The owners are from a big town on the nearby ridge called Tegallalang. They have employed a corporate sales and marketing company to get the place up and running. Their representatives, Kariani and Sony are studiously Balinese, offering every gesture a tourist could wish. 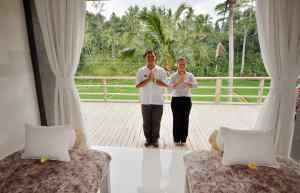 There will be 10 apartments when fully complete. Currently there are six, the most expensive is with a dress circle ricefield view and its own pool. It costs A$275 a night. The lesser ones share a common pool. There is also an expensive restaurant offering fashionably small servings and uncomfortably large prices. Bottles of Lindeman’s Bin 65 that would cost less than A$7 at home are A$77.

The marketeers admit the place is largely aimed at Australians jaded with what has happened to Ubud. They say Kelusa was chosen because it was felt to be a tranquil Balinese village experience- another clue my story played a part. When we visited there was only one apartment occupied- Australian, they said. We saw a lone woman in a bikini beside the big pool. 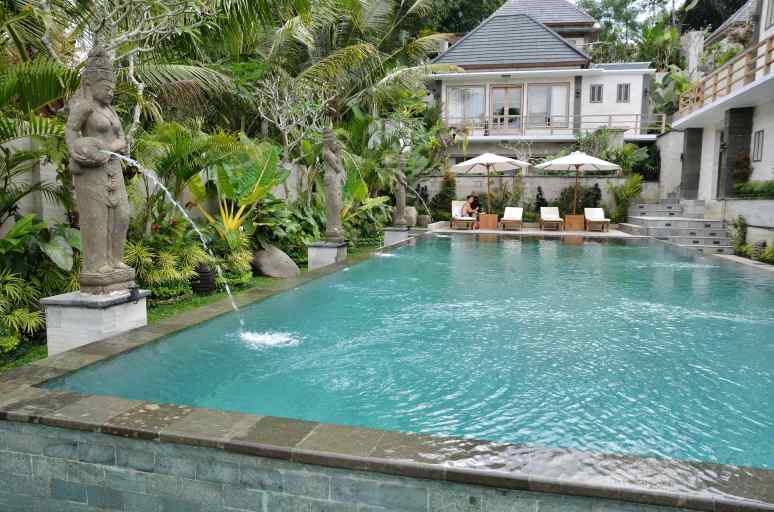 For those who want a closer look at local life they only have to gaze down to a stream of holy water below the restaurant. While guests sit sipping glasses of detox juice, local women are filling used plastic agricultural buckets and carrying them home on their heads to drink. Just in case the guests are not too jaded with Ubud, management offer free transport by fancy Toyota.

In the cast defined structure of Balinese Hinduism, most on the island are condemned to be sudras, the caste supposed to toil in the fields as rice farmers.

Now in this Eden the chainsaws and earthmoving machinery are offering a way out. Our neighbour is using his saw to chop trees that will go into the laundry he plans to open. Next visit there might be noisy bars with wide-screen and football happy hours. If the prosperous want to continue with their rice-field view fantasies, they might have to induce the remaining farmers by paying them as actors.

Outside influences however, can start as innocently as Jill bringing an Australian Rules oval football to a place where foot games are played with a round ball. Most of the kids fell over trying to kick this alien thing, but not our neighbour’s five year old son Komang, who undertood it immediately and kicked straight from his first attempt.

Jill is now wondering whether to recommend her beloved Hawthorn team send talent scouts. Komang Tirta could be the name of the little guy her team’s fans adore after Cyril Rioli retires.

And now a confession. We too chewed on the apple of temptation, succumbing to an Ubud wide-screen footy bar. For those readers either ignorant or from overseas, Hawthorn was playing in this year’s grand final against Western Australian team Fremantle. The bar was full of Fremantle passion, but there proved few opportunities for its display. Their team was in its first ever grand final, but Hawthorn went on to comfortably win its eleventh: its handful of supporters clapping politely. Meanwhile a gamlan was practicing next door, but the locals staffing the bar paid little attention, they were too busy with the brisk trade in drinks and meals.

Bali’s Garden of Eden might be under threat, but for the locals its replacement sure beats dawn to dusk in rice-field mud.

Note: to view the following gallery, click on an image then navigate using left or right arrows. To return to the post click on the x near the top left of the black screen.