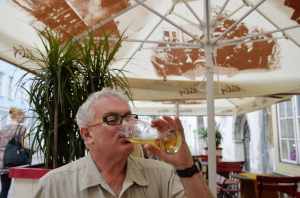 I am currently feeling the effects of the treachery I inflicted on my internal organs yesterday and last night. I am recognising it as my first Estonian hangover. It is not a cheap and shoddy hangover, as endured by many of the Finns and Brits who turn up in Tallinn on a week end booze package. They are trucked in on the ferry from Helsinki or Ryanair from Manchester. No my hangover is of the highest quality, or at least it was caused by the highest quality ingredients.

It seems more than serendipitous that this country’s name is pronounced with the word “stone” in the middle of it. Estonia it seems, with its cheap alcohol, is something of a drunk magnet and this was apparent no sooner than we had stepped from the Helsinki ferry, with a sign on the disembarkment ramp advising that the first Estonian bar was a mere 50 steps away.

I suppose if you were that serious about drinking and averse to travel you could spend the whole week end there and go no further.

We went further and have spent the past two days exploring the old walled Medieval town, which architecturally at least does really give the sense of what living in such a town must have been like. Inside the ramparts these days the barbarian hoards are welcomed with all manner of temptations, particularly the liquid variety, but it would have been different in the past.

Compared to the life outside, slaving as a bonded peasant to some landowner, life in a town like this must have been paradise, despite the fact raw sewage ran down gutters in the middle of the street.

The give a sense of authenticity, the current sewerage system likes to hark back to times past by giving off a pungent whiff, every few hundred metres to remind us of ye olde worlde pong. Speaking of ye olde worlde, there were enough touts offering Medieval patois in several languages  and trying to encourage punters to part with their thoroughly modern Euros.

We did part with with some Euros (far fewer than we would have in Finland) for an extraordinary meal in a small restaurant in a back street. The total package would have qualified as fine dining, set us back about $60 Oz. The place was so popular dozens were turned away, but we managed to get a table after eating our entrees at one of their street tables clutching umbrellas in the rain. A glorious, gorgeous American accented waitress (her father escaped the Soviet Union to the US as a Methodist  pastor) admired our eccentricity and took pity on us. The food (duck and salmon main courses) was exceptional and the delicious German riesling she served us, was followed by an Estonian blackberry liquor and had been preceded by a local beer that is served in narrow glasses about half a metre tall.

So there you have it, the lame excuse for my hangover- and why we went back there again today.