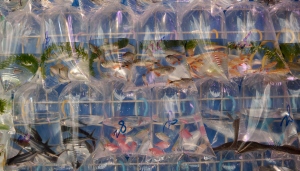 Hong Kong is cramped for everyone.

after the fashion shoot in upmarket Tsim Sha Tsui

normal night scenes. never any pushing or getting impatient

They are so used to change here, that it seems to go unquestioned – but it doesn’t,  if you read the letters section of the South China Morning Post. There are objections, but who knows if they ever succeed in getting developers to compromise. We did a Wan Chai heritage walk which was carefully described in the 2010 Lonely Planet. Quite a lot of it was already gone and swanky shops and chic cafes have appeared between the apartment blocks, while chauffeur driven luxury cars clog the tiny streets.

We have loved Hong Kong. The people have a good sense of humour as well as a purposefulness in their activities. There is no pushing and shoving like mainland China- none of that desperation to survive and prosper. There is no sense of personal threat here and so being a tourist is relaxing- if you count being surrounded by millions of people relaxing. But even the queues to get out of subway stations are patient. There are safety signs everywhere and public notices about how often the escalator handrail is disinfected etc. We are exhorted to keep places clean, not to feed the birds, wear seat belts in the back seat of taxis, to be careful not to show your pin at ATMs. Just like home.

The energy is palpable. It’s a fun place to be. It’s so easy to catch a cab or ferry or one of the cute skinny double decker trams, which run just near us. We bought Octopus Cards on the first day. About $HK115  ie divide by 8 for $A – about $15 to cover ferries, buses, trams, the Peak Tram up to the Peak. You just swipe it like a Myki card and add money to it when needed. Becausse of Geoff’s leg, we have also caught a lot of taxis. Flag fall is $HK20 ie $A3 ish and they charge by distance not time, so the meter doesn’t tick over in a traffic jam.

Our hotel doesn’t feel like a hotel. It takes up floors 9-12 of Lucky Centre in Wan Chai Road. “Reception” is on floor 9. You pay up front on the first day and get your key then don’t have to go there again until you check out. There’s only one girl at a desk anyway. We are in 1208 looking back out on HK hills studded with tower blocks here and there. It’s nice. It’s good value. Five night for $HK4235 ie $520 ish for five nights. HK is expensive, so that is modest. We have a smallish room but big windows and a big very comfortable bed and a ve

ry clean and functional bathroom. The A/C is strong and it dries our washing.

Despite the great exchange rate, we are spending too much money for the start of three months of travelling, with Europe to come. Some cafes and restaurants are pricey. Many are cheap. We ‘ve been to lots of both.

One thought on “Hong Kong”